Editor’s Note: As some of you may know, the TLA Network offers a Certification program. Chronicling TLA practice is a part of that process, which can be fulfilled by writing multiple pieces for the blog. This is the first post from Laurie Pollack, a poet and artist currently pursuing certification.

As part of my daily journaling practice, I write something (maybe a poem or a brief piece of “flash fiction”) in response to a prompt from a book of writing prompts. I choose each day’s prompt randomly. One day the prompt was, “Write a letter to your 10 year old self.”
I have always had a sensitivity to harsh words. As a child I could not handle this, and the adults around me were mystified and could not handle ME. As an adult I have learned to use this awareness to honor the power of words to heal and help and to weigh my words very carefully. It has turned me into a poet.
Dear Laurie ten years old

Because you get in trouble a lot
And sit in the principal’s office.

Because the other kids call you names.
Because when they do it feels
like you were hit in the gut
Hard
and it hurts bad
and the only way to get rid of
the pain is to hit them back.

Because you think your “motor” runs just fine

Because the medicine does not help
but just gives you nightmares
and makes you scared to fall asleep
and makes you want to pull out your hair all the time
and the words still hurt.

And when you do you will call
yourself three words
That will heal you: 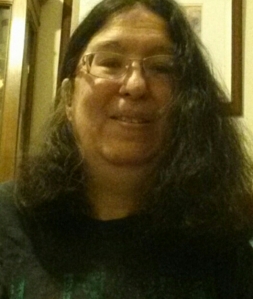 Laurie Pollack by day works with computers weaving code using the words of the programming language Visual Basic.Net, but this is not where her heart lives. Her heart lives in writing poetry and creating art with painting and SoulCollage (R) (an intuitive collage art practice).
She gives occasional local workshops in SoulCollage (R) and hosts several free Facebook events yearly challenging people explore their creativity in writing and the arts. In the latest, “April Fools! Break the Rules!”, participants were challenged to list 10 rules they follow in doing their art or writing then create a piece breaking at least 3 of them. She is thinking of expanding this idea into a longer online class.
She has self-published one book, PeaceWalk, in 2006 and is working on another. “The Box”, a poem set in Sime-Gen, the universe created by science fiction author Jacqueline Lichtenberg, was included in 2015 in an anthology of fan writings, “Fear and Courage: Fourteen Writers Explore Sime-Gen”.
Laurie likes to read her poems at events like desert peace walks and anti-war vigils, enjoys gardening, and shares a rowhouse near Philadelphia with Mary: her legal spouse of 2 years and life partner since 1995, and two cats, Maggie and Lucy, who rule and demand regular “tributes” of Fancy Feast.