Do you prefer to read stories in a book? Listen to them on the radio or in a podcast? See them told live onstage or recorded in film? As you surely know, The Moth showcases stories in any and all formats. For 20 years, The Moth has nourished storytellers and listeners by providing a steady menu of fabulous “true stories told live” (and recorded for later broadcast, etc.).

The Moth’s website describes their anthology, All These Wonders, edited by Catherine Burns with a foreword by Neil Gaiman, as “a new collection of stories about risk, courage, and facing the unknown.”

Interviewed about the new book on Salon.com, artistic director and collection editor Catherine Burns said, “One of these things we say at The Moth is that we’re really trying 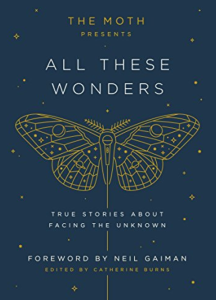 to find the story about how you became you. We know it’s a tall order but that there’s truth in that, and everyone has that, has stories like that from their life. Will everyone find them and tell them in front of a crowd? Maybe not. But I think that most people, if you talk to them and listen very carefully, there are beautiful things. Everyone has something beautiful to say. We find that again and again.”

In the Salon article, Burns talks about how “highly processed” storytelling had become, with blockbuster movies and television programs—all requiring teams of hundreds to tell the tale. “I think this movement has come up because people love to just connect individually with one person, to hear one person’s point of view,” she said.

“Honesty matters. Vulnerability matters. Being open about who you were at a moment in time when you were in a difficult or an impossible place matters more than anything.”          – Neil Gaiman, from his introduction to All These Wonders

The collection contains stories told by well-known writers and stories told by regular people—a scientist, a high school student, a former model, a business owner, and more. The settings range from the quotidian to the wildly unfamiliar; there’s a story about going to summer camp and one about going undercover in North Korea. While each is unique, they all share a sense of intimacy, as if the storyteller is speaking directly to the reader, divulging personal information in a moment of vulnerability.

Hearing (or reading) such absorbing stories is bound to have an impact on the listener. As Neil Gaiman recounts in the foreword to All These Wonders, describing what happened when he became a Moth podcast subscriber, “… every week somebody would tell me a true story that had happened to them that would, even if only slightly, change my life.”