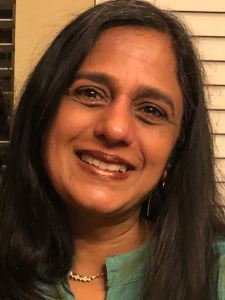 At the Power of Words conference, keynote presenter Usha Akella gave such a stunning and stirring talk on how she started Matwaala, the first South Asian Diaspora Poets Festival in the U.S., that the packed room of those of us listening jumped to our feet to give her  long standing ovation. We then asked her to share a poem of her own, and this is what she read, leading us to jump to our feet in applause again. Here is a link to the beautiful and inspiring Matwaala site.

People let us say it.

Bring back our caged children to a field of sunflowers,

open our land to people as we would our palms

to catch a raindrop,

bring back Aylan in blue shorts

washed up as a fish, snuggled in sand,

let us not say again: he did not make it,

let children not have to tell their stories.

oil her back scarred like a cluster of sardines,

let us hear her laughter before it was married,

let Malala not be shot in the head, let Karla

And bring back Asifa Bano’s rosy cheeks and chirping,

let her bring back goats bare-footed,

and roast warm chestnuts on a humble fire,

let her eight-year old legs not be parted brutally for

things other than what children do,

and bring back all the murdered girl infants

still as stone swaddled in earth.

let us hang them as rotting fruit from trees.

And people, we who know too much with our tentacles of knowing

how much of knowing do we need,

before we say it?

Usha Akella has authored four books of poetry, one chapbook, and scripted and produced one musical drama. She earned an MSt. In Creative Writing at Cambridge University, UK. She read with a group of eminent South Asian Diaspora poets at the House of Lords in June 2016. Her work has been included in the Harper Collins Anthology of Indian English Poets. Her most recent book, The Waiting, is published by Sahitya Akademi, India’s highest literary authority. She was selected as a Cultural Ambassador for the City of Austin for 2015 & 2019. She has been published in numerous Literary journals, and has been invited to prestigious international poetry festivals in Slovakia, Nicaragua, Macedonia, Colombia, Slovenia, India etc. She is the founder of ‘Matwaala,’ the first South Asian Diaspora Poets Festival in the US.

One thought on “Enough! — By Usha Akella: A Highlight from the Power of Words Conference”

The TLA Network supports individuals and organizations that promote the spoken, written, and sung word as a tool for personal and communal transformation. We offer an annual The Power of Words conference; online classes; and a TLA certificate.